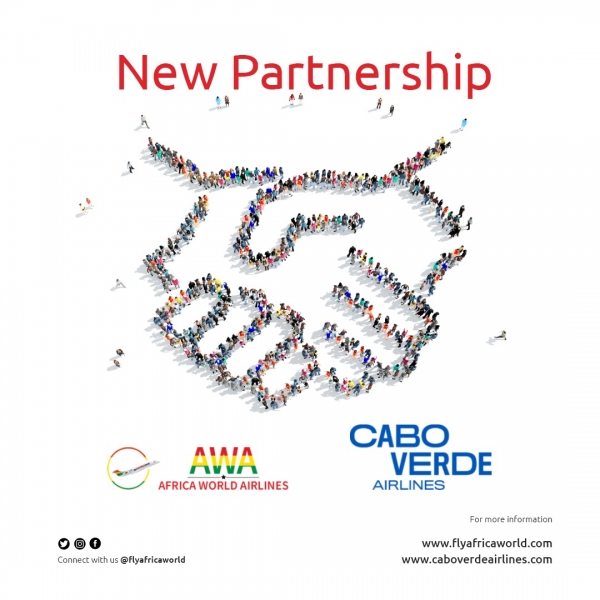 From February 1st, CVA and AWA will start an integrated selling operation for the routes of both airlines.

Cabo Verde Airlines is a scheduled air carrier flying non-stop from its international hub on Sal island, that connects four continents.
With this partnership, AWA’s passengers will be able to connect through CVA’s hub on Sal with other routes of the airlines, like Dakar (Senegal) and the Cape Verdean islands of Santiago, São Filipe and São Vicente.

In addition to the hub connections, Cabo Verde Airlines’ Stopover program allows passengers to stay up to 7 days in Cabo Verde and thus explore the diverse experiences on the archipelago at no additional cost to airline tickets.

Africa World Airlines operates in five cities in Ghana: Accra, Kumasi, Tamale, Takoradi and Wa. AWA also serves Lagos – point of connection with CVA – and Abuja in Nigeria, Monrovia in Liberia, as well as Freetown in Sierra Leone and Abidjan in Ivory Coast.
This partnership will allow passengers from both airlines to travel between airlines with only one ticket, checking in only once, and allowing baggage to reach the final destination.

CVA and AWA’s partnership will become effective on February 1st and passengers will be able to purchase tickets through any purchase channel.