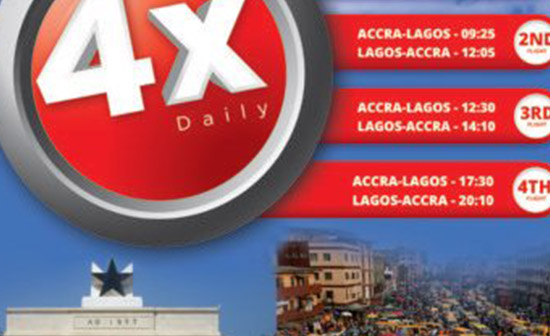 Indigenous airlines are planning regional operations out of the Ashanti Regional capital Kumasi to populous Nigerian city Lagos, following a successful maiden night flight from Accra to Kumasi last Friday.
Kumasi remains the busiest domestic destination with a passenger throughput of some 470,000 as at December 2013. The population of the regional capital, which is the second-biggest and renowned for commerce, stands at about 1.7 million.

Samuel Razak Tachie, AWA’s Brand Experience Manager, told the B&FT: “We are looking at operating directly from Kumasi to Lagos, and that should start shortly. We will also start flights from Kumasi to Tamale back to Kumasi and onward to Accra”.

“A load factor of 39 passengers out of 50-seater aircraft, for a start, is good. We have three slots: 6:30pm, 7:30pm, and 8:30pm. We will evaluate the situation and customer demand then introduce more flights in the future,” he said shortly after touching down at Kumasi on Friday.

The return flight left Kumasi at 20:40pm and arrived back at Accra on 21:20pm

Mr. Atwima Rockson, a passenger on-board the maiden night flight said: “The flight was very nice and comfortable. But the 7:30pm is too early; if they can make it 8pm it will be better. This is because sometimes when you close from work, you would like to go home before catching a flight from Accra to Kumasi, and because of the traffic it is difficult getting to the airport in Accra on time.”

Another indigenous carrier, Starbow, has also indicated its preparedness to start direct flights from Kumasi to Lagos in the future — following granting of the right accreditation by the Nigeria Civil Aviation Authority to operate flights into that country.

Mr. Abrefa Sarkodie, the Kumasi Airport Manager said: “The President inaugurated the Aeronautical Ground Lighting (AGL) project in Kumasi in mid-December last year. What it meant was that we needed to make sure we commence night operations. Because of the time frame the airlines needed to sell tickets before they can do their flights. Fortunately AWA has been able to do their maiden flight.”

We are happy that the investment that was made, we are now going to utilize it and Ghanaians are going to benefit from the investment. The idea is to make sure that the travelling public have variety. We should be able to travel as and when the need arises.

We are hoping that the other operators will also come on-board so we have other schedule. Currently the airport is supposed to be operating up till 11pm. So any flight within that period can be accommodated. We hope that the airlines are going to sustain it, other operators will come on board and Ghanaian will benefit from the investment that Ghana Airport Company Limited (GACL) did with the support of the President.”

The Kumasi Airport has undergone extensive renovation works: two layers of the three-layer runway have been completed and the airport ground lighting systems have been installed. The precision approach path indicator at both ends of the runway, installed threshold lights; stop way, edge and end lights; installation of 32 approach lights and wind-cones are all in place